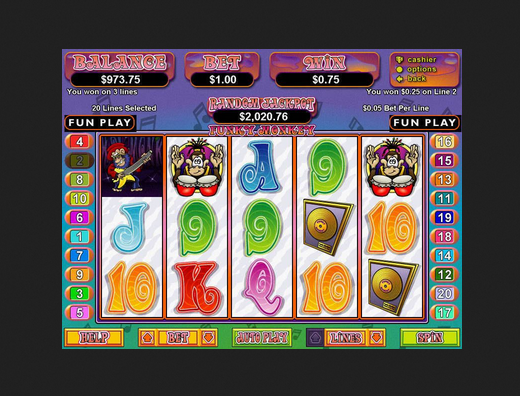 The Details about Funky Monkey Slot

RealTime Gaming was founded in Atlanta, Georgia in 1998, just as the first online casinos had been established on the web. Today, RTG has built up a broad portfolio of online slots, including games that are available to players from the US.

RTG was acquired by Hastings International in 2007 and moved their operations to Costa Rica, but the developer still regularly releases new online slots for the iGaming market.

These slots include titles like Funky Monkey, one of RTG’s progressive slots with several bonus features and a unique theme. Funky Monkey plays over 5 reels and 20 paylines, and includes features like free spins, multipliers, and a 2000 coin fixed jackpot payout.

The theme of Funky Monkey revolves around a band of musical monkeys and their antics. Each monkey has mastered his own instrument, ranging from singing to keyboards and bongo drums. The graphics of this RTG slot are simple and cartoon-like, creating a light-hearted overall feel.

The backdrop of the game is blue and green, and is decorated with music notes to add to the theme. A funky soundtrack plays as the reels spin, and winning combinations are also accompanied by their own themed sound effects.

The symbols of Funky Monkey all relate in some way to the theme. First on the reels are the playing card symbols, which award lower payouts throughout the game. These symbols range from 9 to A in colourful, swirling lettering.

Next on the reels are the character symbols. There are two monkeys here, one playing the keyboard in the band and the other on bongo drums. Other symbols include a yellow Jeep and a golden framed record.

The monkey on keyboards will pay 2,000 coins if players can land 5 of this symbol on a winning line. The monkey on bongo drums pays 1,500 coins for 5 of a kind. 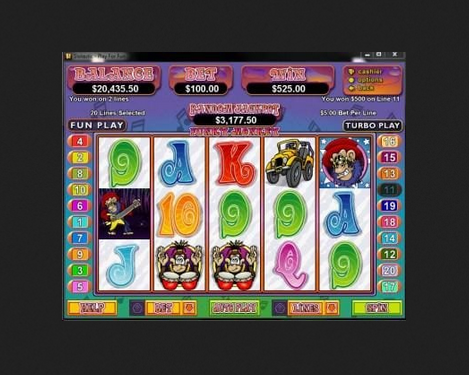 The Funky Monkey himself is the guitarist of the band, and this character is also the wild symbol. This wild symbol appears only on reels 1, 3 and 5 of the game, and substitutes all other symbols but the scatters.

There are 2 different scatter symbols in Funky Monkey – a Funky scatter, and a Monkey scatter. Landing three of these scatter symbols on the reels will pay players up to 100x their original bet.

The Funky Monkey bonus feature will be triggered when players land the Funky Monkey scatter symbols next to each other on the reels. Here, players will be able to choose one of the 3 monkeys in the band to perform a song.

Depending on the reaction of the audience, players will be awarded up to 25 free spins and up to 10x multipliers for the free spins game. The free spins feature cannot be retriggered from within the bonus round.

The Funky Monkey progressive jackpot amount is live, and is displayed above the reels in the base game. This progressive jackpot is randomly awarded, and needs no special symbol combination to unlock. The jackpot may be awarded at random after any real money game of Funky Money is ended.

2022-08-05
Previous Post: A Simple Guide To Online Gambling in Norway
Next Post: Have the Best Online Bingo Experience with Our Exclusive Guide