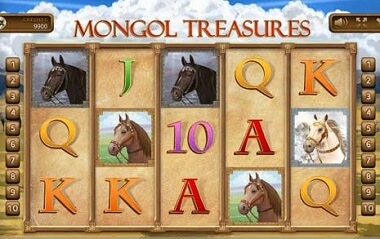 If you recognise the words of Samuel Taylor Coleridge’s Kubla Khan, you’ll know that the Mongol empire for years represented the pinnacle of all that was exotic and mysterious to the European mindset. At one time covering more landmass than any other empire before or since, the Mongols built wealth based on fast warriors and nomadic tribes, and were stopped in their expansion only by the Great Wall of China to the East, and the lack of grasslands to the West, putting paid to their advantage on horseback. So what does this have to do with a slot game?

Endorphina have crafted a slot with a classic look and feel, with unflashy animations that appear to have been painstakingly hand drawn, and smooth rolling reels. The backdrop of the game is that of the Mongolian steppes, with the snow-clad Himalayas in the background, an area today still largely untouched because of its vast open spaces. Here, where horse mounted herders still hunt with hawks, a Mongol man and lady welcome you to the game, and appear in the reels, with any luck.

Players can set wagers on Mongol Treasures from 0.01 to 5 credits per coin, and choose up to ten pay lines. You can check out many slots with similar payline system at https://mobilepokies.net.nz/review/gaming-club. What makes the game truly profitable is the Scatter feature, also triggered by the Mongol lady (clearly good at multitasking: she is also the Wild symbol, and can substitute for all others): three of her symbol will trigger ten free spins, which can be retriggered during this, and helps to build to the potential 5000 coin bonus.

The game has an Auto play function, which can be set, and offers serious gamers the option of keeping several slots going simultaneously: it also offers a “Gamble” feature, allowing you to wager any winnings, in true traditional style.

The game uses traditional playing card symbols as those of the lower value: while this may not be terribly traditional or faithful to theme, ask a number of people what symbols they would associate with the Mongol empire, and you’ll see why these were chosen (for the odd person, yes, the recurved bow would have been a good symbol).A nomadic people almost by definition do not acquire many physical possessions: by contrast, however, such a society would prize horses extremely highly, and three of these hardy examples figure as the next highest-ranking symbols. Finally, the Mongol hunter is the second-highest ranking of all figures, and his wife the highest ranking: find 5 of her on the reels, and win a 2000x multiplier of the triggering bet.

Mongol Treasures may lack the flashier animations so popular nowadays, and its lack of any real Bonus rounds or separate screens may make it appear dated, but most reviewers will label it “classic” rather than “basic”, and appreciate the timeless look of the game. It is worth checking out for the quality of the game play alone, although it does have the potential for some lucrative payouts, given time, and the originality of the theme alone is deserving of praise.