Glitz is a pretty unique video slot from Williams Interactive Software. The slot boasts a very different reels structure, featuring five reels and sixty paylines, but reels one and two have only two rows while reels three four and five have four rows. This adds up to a huge amount of paylines, but does also mean that Glitz is quite an expensive slot to play due to that same amount of paylines.

Glitz is a part of the Money Burst Series of slots from WMS Gaming, and has caused quite a stir in the online world. Originally a brick and mortar slot machine, the game was redeveloped for the online audience where it shot to stardom pretty fast due to its unique layout and good wins.

Glitz doesn’t really have a theme as in the same way that other slots do. There are no theme based character symbols, or picturesque backdrop. What Glitz does have is a peek at what you may obtain should you become a high rolling winner. The overall feel is one of glitziness, no surprises there. The symbols are gemstones, all sparkly and nicely cut.

The reels are neat, with a plain gradient red background. The buttons at the bottom are not WMS’s usual gold with blue and rounded edges, but instead this time are a light gold gradient and black, and look very classy. This is definitely a classy slot. All information is neatly laid out and easy to understand.

The symbols in Glitz are pretty much all gemstones. Green ones, blue ones, gold ones, you name it. There is also a gigantic jewel Wild that replaces all other gems on the reels, and a golden coin scatter symbol that cannot be replaced by the gigantic jewel wild. 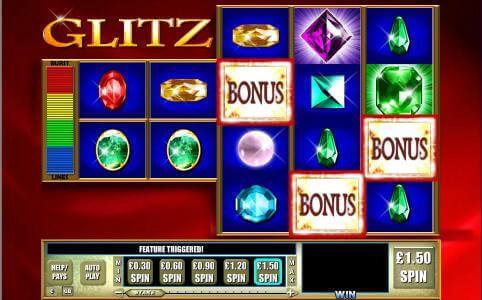 The bonus feature in Glitz is the games main attraction, and can be launched in three different ways. These are a tad complex due to the unique reel layout. The first way is to land four matching symbols on the left, smaller reels and three coin scatters on the bigger right reels. This will award you with twenty free spins. The symbols on the left will be held for the duration of the free spins, which increases you chances of winning on every spin.

The second way to launch the free spins bonus is to land three scatter coin symbols on the bigger right reels, and nothing on the left. This will award you five free spins, and the chance to pick from a selection of jewellery boxes to reveal a symbol that will replace those on the left, and be held for the duration of your five free spins.

2020-03-10
Previous Post: A Closer Look at Goldilocks Online Slots Game
Next Post: What is Online Baccarat and How You can Play This Game